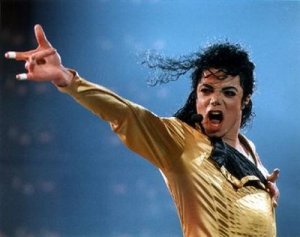 Today is the second anniversary of the death of Michael Jackson.  Earlier today I posed a question on my facebook page asking my friends how they will remember him.  As you can imagine the results were mixed but everyone had an opinion.

Let’s not kid ourselves, the guy was NOT normal.  Any man other than MJ that would dress like Peter Pan and sit in an oak tree at an amusement park would be taken away by men in white with large butterfly nets and he would then spend a few years in a rubber room weaving baskets out of cooked spaghetti.

Normal people go to the theatre to watch “The Elephant Man.”  They don’t get on eBay, buy his remains and put ’em on display in their rec room so they have something to stare at while their pet chimp is holding the Nintendo controls.

When I go to the doctor I let the nurse take my blood pressure and engage in some small talk before I see the doctor.  I don’t use that time to see if she would be interested in being a portal for my DNA so I could assume custody of our offspring and then cover their faces like they were on the run from Wyatt Earp.

Let’s also not ignore this:  Thirteen number one singles, the greatest selling album of all time, a billion dollars in earnings AFTER his death, and seven more albums YET to come before 2017.  Michael Jackson changed music and he will be remembered as one of the greatest performers of all time.  Maybe we all should embrace our inner crazy a little bit more and see what happens.