Joe Biden stepped out of his shower and over his dog and out of the basement yesterday to ask America to wear a mask during his first one hundred days in office. I’m sorry. Who are you again?? Are you the same ass munch that called Trump supporters “CHUMPS” on October 26, 2020? Now you care about me?? Now you want to be my friend?? I’m sorry but you didn’t say “Foo-chi Sez.” 🤣🤣🤣

This is the eight hundred pound gorilla in the room that the stupid media has not addressed for some reason; There are 74 million Americans that do NOT trust Sleepy Foot and Camel Toe. We want NOTHING to do with these people. Just because Sleepy Foot rings the bell doesn’t mean us free thinkers are gonna bark for a Scooby-Snack. I’m not saying that The Chinese Virus does not exist. I lost a fifty-two year old friend on Thanksgiving morning. A thirty-year old friend got The Chinese Virus and was in ICU in Florida but has since been discharged. The virus exists. I’m not convinced we really know what it is. Dr. Foo-chi has changed his mind numerous times. CDC and WHO have flip-flopped as well. How does Sleepy Foot think that we all will agree to wear a mask for a hundred days???

There is a limit as to what you can take from me and I think many Patriots share this feeling. NO ONE SHALL TAKE MY FREE WILL!!! A mandate, a curfew or a suggestion is NOT a law. You will NOT be able to legally enforce it. I don’t have a need to be outside or around the public. This is a luxury the majority of Patriots do not have. The left has taken enough and they are coming for more. They aren’t even trying to hide it. Don’t get me wrong. I hate seeing people suffer and die alone but it insults me beyond the depth of my soul for those that use “fear” to evoke the sacrifice of free will. We all will be forced to make a decision within the next few months if we ant to receive the vaccine for The Chinese Virus. Make sure that is YOUR decision. It is much better to die on your feet than it would be to live on your knees. 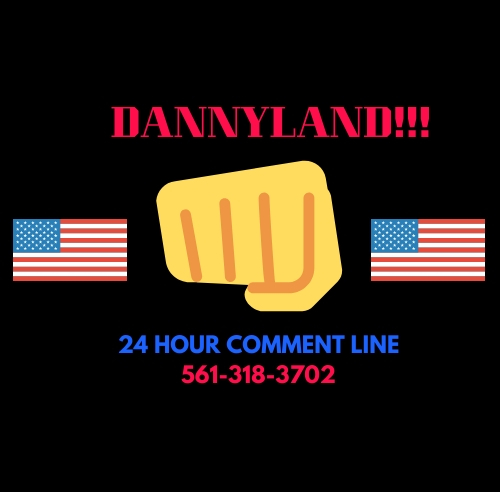 Ya don’t wanna miss another crazy call on the comment line.  I finally got to talk to my shrink on Wednesday.  Howard Stern wants some of his listeners to die. 🦾🦾🦾 Joe Biden continues to say strange stuff.  Danny proves Hillary Clinton is a liar. 🔥🔥🔥 China is now blaming the United States and Danny wants revenge!!!   Here in Ohio we are required to wear masks and the next day the Governor changes his mind.  What is going on?  Click and join the revolution. ⚡⚡⚡

Friends.  We have never seen times like this.  CHINA HAS ATTACKED US!!! ⚡⚡⚡ The MEDIA is lying and provoking us!!! 🔥🔥🔥 The Government is misleading us.  Soon we have to WEAR A MASK????? 🔥🔥🔥Times are terrible yet Danny leads the crusade to peace and freedom.  Click, share, and listen. 🙏🙏🙏

Bad things are happening but this podcast is a lot of fun. 🔥🔥🔥 Danny rips into Millenials, gets pissed that his grocery delivery has been cancelled, Trump gets pissy with a reporter 😡😡😡 Political Incorrectness!!!!    Lot’s of it.  Listen!!!  Just click and be safe!! 💉💉💉

Did ya really think this was not gonna be a big deal?  It’s gonna get much worse before it gets better.  National Guard and tanks in the street is just a matter of time.  Will the restaurant business ever recover?  Do you really think there is gonna be a baseball season?  What happens when the drug stores run out of medications?  The health system is barely working right now.  How will it survive this?  This is not gonna be a good week.

So now we have to hurry up and wait.  Just sit back and let it die out.  It’s gonna take time.  It’s going to affect a lot of people.  People, businesses and cultures will be changed forever.  Remember how this started:  a bat, a man, a lie and China.  We must learn from this that we don’t go around just trusting anyone.  Think about the people you trust the most.  Chances are you have known and trusted them for years.  Think about people you don’t trust.  It’s because they lied and cheated on you.

Be leery.  Be apprehensive.  Be cautious and be careful.  These are turbulent times.

We close out the week with Danny’s best podcast yet!  A HILARIOUS funny phone call.  A dance party in Dannyland!! 🎶🎶🎶  Good news for Browns fans.  Should we legalize drugs? 💊💊💊A Royal Family update and more!!!! 🦾🦾🦾

Chinese people are nice people.  Hard working people.  They also eat a lot of weird shit.  Their government lies all the time but that’s what government does.  They don’t help.  They lie.  Having said that I’d keep my eyes on this outbreak of the Corona Virus.  So far 23,500 have been infected resulting in 490 deaths.  Let’s compare that to the flu of 2019.  The Center for Disease Control estimates 42.9 million people were infected, 647,000 people hospitalized and 61,200 people died.  So why worry about the Corona Virus?  Simple.  It started in late December and it’s spreading at an alarming rate.

Now cruise ships are being quarantined and for good reason.  Ya ever been on a cruise?  It is filled with germs, disease, obesity and filth.  It’s gotta be like Happy Hour for any type of virus.  So after eating a bunch of processed food and putting on ten pounds these cruise people come back to port infected with the corona virus.  It’s truly the perfect storm.

If the corona virus started in this country instead of China I wouldn’t be as concerned.  China has never told the truth so why would they start now?  People are dropping dead because some Chinese dude ate some bat soup?  Do ya really believe that?  You don’t think that there is biological warfare out there?  Iran gets pissed at China because they made a trade deal with the United States.  Isn’t that a better possibility than pointing the finger at Fung and his bowl of bat soup?  I’m not saying that is what happened I’m just saying we need to question everything and not let our guard down.  It’s also a good excuse to avoid people…….which I do every day.  See ya in the dungeon.  Thanks for reading.

Danny is at the doctor or hospital at least once a week.  Monday he was there for some tests and has a great story to tell. 💉💉💉 Why did Danny have a master key to his high school? 😂😂😂 A phone call to the Tempe Police Department to ask about their arrest of PENIS MAN!  Click below and share with a friend please. 🚨🚨🚨

Shut off “The Bachelor.”  We have a crisis going on.  People are infected.  People are quarantined.  People are dying.  All of this at an an alarming rate.  Corona virus is related to Sars.  Sars was easily contained.  Doctors have said that the Corona virus is not.  It has been confirmed that it can be transferred through eye contact.  Think about how many times during the day you take your finger and touch your eye.  If you wear cheaters, like I do, then you probably have been infected five times in the last two minutes.

Look…..China is NOT telling us the truth.  They never have?  A couple of people get a cold and they need to come clean?  Please!!!  My point is simple….if what we know now is bad…..and it is…then the TRUTH has to be twenty times worse.  I think this country has become comfortable.  We have let our guard down.  We don’t question things any more.  We don’t look at others for having a motive we just allow them in.  In my lifetime we did this before.  Then 9/11 happened.  Then we all got on board.

Is this a bad case of the flu?  Will it be contained?  Will thousands die??  Millions???  Is it an act of biological terrorism because of China signing a trade agreement with the United States?  Time will tell my friends…..but all options are surely on the table and in play. 🦾🦾🦾

Danny’s podcast is free and really entertaining.  Link to it HERE