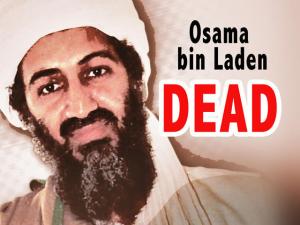 I woke up to the news this morning that Osama Bin Laden is dead.  My reaction was obvious joy which turned to heavy skepticism.  It’s just the way I think.  Let me preface these comments by saying I have the highest respect for the men and women of our military.  I also have the same amount of apprehension for our government officials who have been misleading us for YEARS.  In the late 40’s we went into Nicaragua and infected citizens with syphilis just to make sure penicillin DID work so this is nothing new.  I HOPE the news is true but at least consider these points:

1)  BIN LADEN DIED YEARS AGO:  Back in 2006 CNN reported Bin Laden was seriously ill with typhoid.  He also supposedly died two years ago of cancer.  His FACE would instill fear in people.  This doesn’t break up terror cells.   Retaliation is what FUELS al-Qaeda.

2)  BURIED AT SEA:  U.S. officials say they did this in accordance with Muslim tradition and law.  2,752 innocent Americans were killed on 9-11-01.  I know that isn’t part of Muslim tradition and law.  Why not bring the body back, conduct the DNA tests here with numerous doctors/scientists from different countries, then bury at sea so there is no shrine and no doubt?

3)  CLASSIC DEFLECTION:  The economy is tanking, gasoline prices out of control, second wave of foreclosures coming, the value of the American dollar is at a record low, these are tough and trying times.  With the “death” of Bin Laden we once again put these issues on the back burner, wave flags and chant “USA, USA, USA.”  Just remember that as hated as George Bush was when he left office he had an approval rating at one time of ninety two-percent.

4) WAS HE REALLY RESPONSIBLE FOR 9-11?:  No question Osama Bin Laden was a terrorist.  We have been told he was the mastermind behind the attacks of 9-11.  If that was the case how come the FBI NEVER included those allegations on their most wanted poster?  See poster HERE.

I hope this SOB IS dead but ya know there’s just another whacko behind him grabbing the ZZ Top beard, walking stick, Match Game ’77 microphone and a fitted sheet.  Terrorism doesn’t die with the death of Bin Laden.  Now about that moon landing…………:)