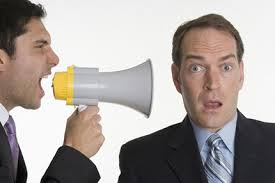 I have been told that I am “headstrong.”  The same person  also told me that potential employers don’t like that in an employee and I should “tone it down.”  What am I twelve and standing up on a moving school bus during a freaking field trip?  I am headstrong and I like headstrong people.

I respect people in authority but I’m not gonna nod my head in agreement about something I don’t agree with or think there may be a better option.  I believe a truly great boss surrounds him or herself with headstrong people.  You wanna be king of the jungle not just a herdsman of some dumb sheep.

I have actually been required to attend team building seminars where we threw around bean bags and balloons and were told “there are no bad ideas in brainstorming.”   Uh….yes there ARE bad ideas in brainstorming Mr. Einstein.  Doesn’t anyone remember “New Coke” or “Crystal Pepsi?”  If it’s a bad idea you are going to get bad results.   It seems that people SAY  they want honesty right up until it’s something that they don’t agree with.  How about this for honesty:  If you need to force your employees to play with balloons and bean bags to increase office morale….you are running a daycare and not a business.

I have always learned the most from people I disagreed with.  It forces you to think in a different direction.  I’m not saying that everyone I have disagreed with has taught me something because I’ll be honest again:  There are a LOT of stupid people in this world.  I don’t think that’s an opinion because I live in Florida and that pretty much is a statement of fact.

I will never say “what you wanna hear” but I will say “how I feel.”  If more people did this on a daily basis then we would be a much more productive society.  Again…this is just my opinion.  Maybe I’m just being headstrong.

Danny Czekalinski hosts a weekly LIVE internet radio show called DANNYLAND on mysourceradio.com    Listen to it Thursday mornings at 9AM EST or check out the show archives HERE