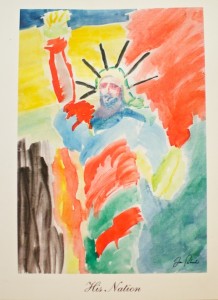 If you know me then you know I have always made the comment “I’m gonna sell everything except the Harley, move to Key West, and tend bar.”   The way things are going in this world I’m ready to move there NOW!

Look at the water-color to the left.  It was painted by Senator Dan Patrick of Texas.  He actually said the face of Jesus magically appeared when he tried to correct his painting.  Ever since Chaz Bono has been announced as a contestant on “Dancing With The Stars,” discussion boards have blown up!  “I’m not watching.”  “How did he grow his beard?”  ” Does he FEEL like a man?”  “Look at all the cheese he bought this weekend.”  This is REALLY happening people!

I don’t care if Chaz Bono can grow a beard.  Eat all the cheese ya like.  I don’t worry about what he feels like.  Chaz Bono doesn’t affect which TV show I watch but I would look at his “thing” if he slung it over the shoulder of Tom Bergeron.  Just being honest.

Jesus didn’t “magically appear” on your painting Senator.  You suck as an artist.  Unless you make your living as painter I think we all were pretty much done with water colors by our tenth birthday.  Why not say you think Jesus may have been homosexual since he never married and always hung out with a bunch of guys? THAT makes more sense to me than you claiming his face “magically appeared” when you couldn’t find your Lite Brite and you decided to play with your paint-by-number set.

The Dow Jones is falling and the crazy factor is going off the charts.  Time for me to plan a yard sale!